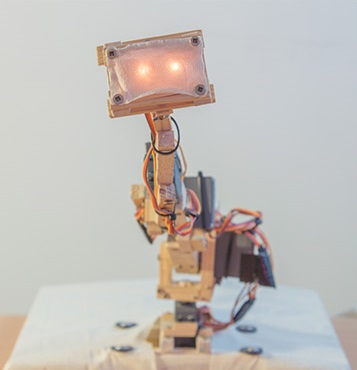 Adelino is a craft robot, that was built using wood and hobby-grade servos, to demonstrate how well the Nutty Tracks and ERIK can perform even on a low-fidelity robot.

Demonstration of the ERIK Expressive Kinematics technique with Adelino (published in the ACM International Conference in Multi-modal Interaction, ICMI’17)

Following on Hoffman & Ju, 2014, we started by designing the concept of the robot using 3d animation software. The robot was designed as a line shape, as it is common for traditional and 3D animators to start their learning process by animating lines of action. These lines of action are “the first line indicated in a pose, that shows the basic overall posture, prior to adding the rest of the details” (Goldberg, 2008). The lines are used to design the attitude poses of a character – ones “that convey what a character is feeling while he’s moving”. We can think of the line of action of a humanoid character to be its spine, grounded by its dominant leg. Based on this concept, we created a robotic line of action, with a minimum amount of degrees of freedom (DoFs). We added however, a face-like tip on the line in order to allow it to express gazing behaviour. After our design concept phase, during which we tested some 3D animations with the character, we settled with five DoFs. In order to overcome typical low-end servos’ limitations of rotating only 90 degrees to each side, the head was changed to be nearly symmetric along its vertical axis. Instead of having a front or back side, depending on the target posture and gaze direction, the robot could twist and turn upon itself, using the head upside down, while still having the same appearance.